The Osler Club of London

We should like to extend an invitation to our colleagues in the Anglo-French Medical Society and Societe Medical Franco-Britanique to join us in membership of the Osler Club of London.

The Osler Club was founded in 1928 in memory of the eminent physician Sir William Osler, often described as the father of modern medicine, who was devoted to a humanistic approach in understanding and treating patients. The club meets eight times a year at the Royal College of Physicians for lectures by its members or distinguished speakers from outside to discuss a variety of topics related to medicine in general, its history and philosophy and ethical and moral issues. The meetings are preceded by drinks and followed by a buffet dinner in a convivial atmosphere. There is also a close liaison with Osler societies in the United States, Canada, Japan and Argentina.

Our website at www.osler.org.uk provides a great deal of background material and contact details. Additionally both of us are Council members and will be delighted to answer any questions. 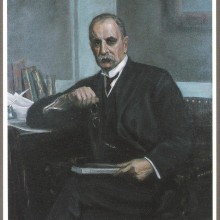