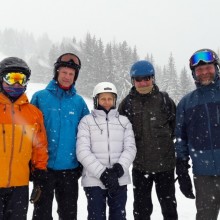 February 2nd 2017 saw the gathering of some familiar faces at the wonderful  L’Aguille du Midi in Les Bossons for the AFMS winter meeting. It was also good to welcome some new faces, including the first French delegates for many years.

After a day of blue skies and sun the snow arrived. This provided the skiers amongst us with the opportunity to explore, at least some, of the many ski areas in the Chamonix Valley. Snow shoeing was also popular, with Helen leading the way. For those who decided against experiencing the cold and snow of the great outdoors, there were jumpers to be knitted!

We enjoyed four lively talks on the Friday evening. Andrew Farrall enlightened us on the development and clinical use of carotid ultrasound. From Aristotle in 400BC, via experiments studying the speed of sound in water in Lake Geneva in 1822, to the first carotid Doppler in 1991. I gave a quick update on stroke, an area of medicine that has changed dramatically over the last 20 years. Since the introduction of stroke units mortality has halved in the UK. Additional treatments have become available in recent years – including thrombolysis and thrombectomy, which can have life changing implications for some patients. At last stroke is rightly being recognised as a medical emergency. Colin Mumford reminded us of the potential perils when medicine and the legal system collide with a thought provoking presentation that resonated with all of us in clinical practice. Finally Andrew Hassan gave us a fascinating insight into medical migration, illustrated by his father’s journey from Egypt to practising as a GP in the UK. This journey was by no means straightforward as demonstrated by the documents Andrew brought along with him, including his father’s passport. However, he started work as a GP in 1947 and worked until retirement at 72 – with plenty of stories to tell along the way.

Once again the winter meeting was a great success and I would like to thank the organising committee, the wonderful hotel staff and all the delegates for playing their part in that. I look forward to Chamonix 2018 and hopefully meeting more new faces from both sides of the channel.

And with thanks to the Miss Ford Trust for their continued support
info@anglofrenchmedical.com
The Anglo French Medical Society - © 1988-2023
Registered Charity No 327706 - Registered in England & Wales
Original Theme by Grace Themes | Modified by the AFMS.